Book Talk: “So You Want to Sing Spirituals” 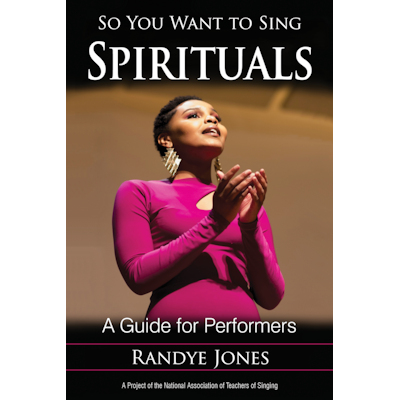 Author and musician Randye Jones will discuss her new book, So You Want to Sing Spirituals: A Guide for Performers.

Although the book covers a range of subjects related to studying concert spirituals both for solo voice and choral forces, Jones’ current plan for the talk is to discuss the beautiful “rare gems” in the spirituals song literature and their composers.

Jones’ book talk will serve as an opportunity for attendees to participate as well—after all you can’t talk about singing without doing some.

The book talk and signing is presented by the Coaliation for African Americans in the Performing Arts (CAAPA):

The event is free and open to the public.  For more information, please contact research@artofthenegrospiritual.com.

Soprano and musical historian Randye Jones is a native of Greensboro, North Carolina. As has often been the case with other African American singers, she had her first exposure to Negro spirituals—and German hymns—in her home church. She received her bachelor’s degree in music education from Bennett College and her master’s degree in vocal performance from Florida State University, with additional studies in vocal literature at the University of Iowa. While at Florida State, Jones expanded her musical interests to include both music research—especially related to vocal music by African American musicians—and music librarianship. She became a music cataloger at the university, followed by additional library work at George Washington University in Washington, D.C. Jones currently holds the position of media collections coordinator for the libraries at Grinnell College in Grinnell, Iowa. As a researcher, Jones has been a pioneer in producing web sites featuring research of African American vocalists. She created the website Afrocentric Voices in “Classical” Music, which launched in 1998. More recently, Jones launched the Spirituals Database, a site with information on over 5,000 concert spiritual recording tracks. She has also published several online articles, including “The Gospel Truth about the Negro Spiritual” and essays on recordings by singers Roland Hayes and Marian Anderson that were selected for the Library of Congress’ National Recording Registry. In addition to her activities as a singer and lecturer in the Midwestern United States, Jones has presented at the National Association of Negro Musicians (NANM), the Research, Education, Activism, and Performance (REAP) National Conference on Spirituals, for the Harry T. Burleigh Society, at the African American Art Song Alliance and the Music Library Association (MLA) conferences. She was interviewed for the Australian Broadcasting Corporation’s 2016 documentary, Spirituals: The Foundation of Popular Music.

Pianist Francis Conlon has performed at most of the colleges and concert halls and has partnered with countless soloists and chamber ensembles in the Washington, D.C. area. He has performed in many different cities throughout the United States, Canada, Central America, Europe, Japan, and India, including at Carnegie Hall in New York City, the Gardner Museum in Boston, Robin Hood Dell in Philadelphia, and locally at the Kennedy Center for the Performing Arts, the National Gallery, the Phillips Collection, the Corcoran Gallery, the Library of Congress, the Smithsonian Institution, and Wolf Trap Farm Park. He has appeared as concerto soloist with the Montreal Chamber Orchestra, the Alexandria Symphony, the Georgetown Symphony, the Washington Chamber Orchestra, the Washington Camerata, the Amadeus Orchestra, the Catholic University Orchestra, and the George Washington University Orchestra. Mr. Conlon has taught at George Washington University, Catholic University School of Music, George Mason University School of Music, Georgetown University, the Ellington School of the Arts, the Levine School of Music, and the Sidwell Friends School. He has served as Minister of Music at the Church of the Annunciation for 50 years and as the Director of Music at Temple Rodef Shalom for 47 years, and he has run the Catherine and Mary Roth Concert Series for many years.